Feel free to talk about anything and everything FSOL related in this board.
Post Reply
1 post • Page 1 of 1


HELLO WORLD: CODE AND DESIGN examines the role of code in contemporary design, considering the ways in which designers are integrating computation into their practice. The exhibition gathers objects and technologies from across the design spectrum—from fashion and textiles, to the moving image, graphics and the handmade—in order to reveal the social, economic and critical impact of code and design.

Stakker
United Kingdom
Mark McClean and Colin Scott (visual imaging),
Brian Dougans aka Future Sound of London
(music), Marek Pytel (executive producer)
Stakker Humanoid, 1988
Video. Duration: 05.04
Stakker Humanoid is a seminal music video that
captures the energy and drug-fuelled synesthesia of
the late 80s rave scene. Its combination of analogue
film processes and digital sampling techniques was
groundbreaking, establishing an aesthetic of frenzied
graphic density that has now become commonplace.
Begun as an art college project of 35mm film
loops and hand drawn graphics, the project advanced
when Stakker secured the loan of a Fairlight CVI, an
early video synthesiser developed in Australia. The
result was Eurotechno, a 30 minute video art piece
produced for Virgin Records. The cut down version
on display here was released as the single Stakker
Humanoid, becoming a top 20 hit across Europe. 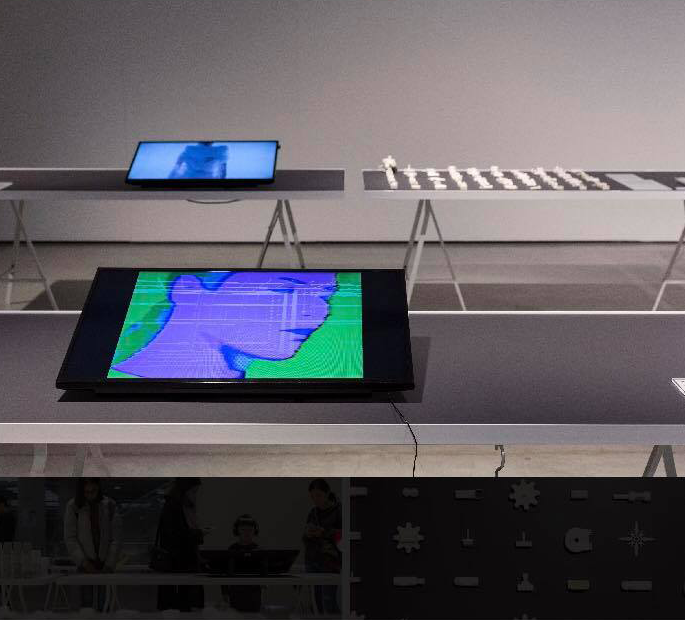