Feel free to talk about anything and everything FSOL related in this board.
Post Reply
215 posts

I think you should bend the rules about this one

FSOL seem intent on breaking ties with the traditional album format, so you'll need some rule-bending either way.
The most complete experience will be to buy the 48 track version and remove the ones you've already got. However this will mean it's quite jarring as the tracks all flow together.
The most satisfying listen will be the CD version, because the tracks will all flow together. However this will mean missing out on 13 tracks.

So, whichever is most important to you. Or just try and enjoy the music regardless of format.
FSOL NEWS /// ENOFA
Top

Use A:E:V as an catalyst for growth and change and move away from artificial limitations and structures. Have some faith in FSOL's ability to assemble excellent sequences of beautiful music.

Do what's best for you, whatever that may be.
Top

gabo86 if you don't do singles or EPs and don't do compilations then you are surely missing out on a good number of tracks.
IDK why you would punish yourself like that

anyway can we get a breakdown of the different formats?
Is it the vinyl/digital are the same.....CD has less tracks but 2 exclusives??
Top

seedy wrote:anyway can we get a breakdown of the different formats?
Is it the vinyl/digital are the same.....CD has less tracks but 2 exclusives??

CD came this morning. I was doing a track-by-track but then accidentally pressed refresh instead of new tab, and I can't be arsed to go back and write it all out again. So a few thoughts, at least:

The opening minute of Persistence of Vision is incredible, maybe the best of all the environmental bits in years. Really detailed and textured, took my mind back to the '94 era ISDN shows.
Unforth is incredible. That guitar strum is so haunting.
Opposite of Thought - FSOL do dubstep? Also a female vocal sample, a classic FSOL trope that they've not used much recently.
Silence in Her Eyes - maybe the only track here I'm not fond of. Nice textures, but it doesn't need to go on for as long as it does (especially given that some much better tracks are shorter!)
The general mood of the album matches the artwork brilliantly, which is nice given that this hasn't always been the case with some of the other Environments records (particularly 2 and the hotel corridor, and 6 with the underpass). Seashore, open space with a windfarm, vast sky - it all feels very open, spacious and deserted. Kind of a much less foreboding version of 6.
Despite a structural similarity overall, this feels different to E6+6.5, having far fewer short environmental tracks. Almost everything here works as a standalone piece rather than simply part of the overall flow.
Which isn't to say that it doesn't flow. It's up there with E2 and 4 and their '90s stuff for me in terms of tonal consistency.
I'd say it's their most laid back record since E2, lacking the more intense moments of 3 and 5, the busyness of 4 and 6.5, and the dark, foreboding feel of 6.
It's taken me a bit of time, but I'm really digging this synth-based version of FSOL we have now. At first I really missed the more sample-based approach, but tracks like Its Very Existence have completely won me over.
There's room for Rosey's Perspective and Far Hills to be on the CD, and I wish they were. They'd just make it even better. Ah well.
The idea of FSOL releasing cover versions on an album is really strange to me. I particularly love Late October, but they're just the last group in the world I can ever imagine doing a cover version.
Where You Going is fine, but I can't work out why it was chosen over Culture of Individuality, which fits the mood of the album far better.
Half Light and Perpendicular are both nice tracks, probably two of the weaker ones on the album but they work well as a coda to the rest of it, especially after the run of piano tracks.

Moody and melancholic, evocative of vast, desolate landscapes, coherent with barely a bad track. This is easily the equivalent of 6 and 6.5 in quality, and it might even go on to top them.
FSOL NEWS /// ENOFA
Top

An intriguing observation about the Environments series in general: volume 1 had two side-long tracks, which was a new approach for the band, but highlighted the morphing, formless approach to their more ambient collages. By this point, we've reached the opposite extreme, where every brief ambient section has its own index, leading to a multitude of short tracks instead.

At first I was disappointed that E1 was just two long pieces rather than an album of individual tracks, but I've warmed to that a lot, to the extent that I almost wish they'd continued down that route (it would also have given the series a consistency in format). I remember E2 was originally advertised on FSOLDigital as being 'one hour, three tracks'. The gap between Serengeti and Colour Blind gives us an idea of where the first separation would have been; I wonder why they abandoned this approach.
FSOL NEWS /// ENOFA
Top

We went Views then ENV then Archived then Views again!

Source of Uncertainty may very well be my new all time favorite FSOL piece - reminds me of Debussy, but yet so original !

Viewed from Pushkinova 7 - I swear I heard additional sounds for the first time on that hi-end equipment - it has so many layers of sound... amazing...
And the woodwind instruments they use in the second half - those are like traditional balkan / macedonian sounding instruments - so just got to me there 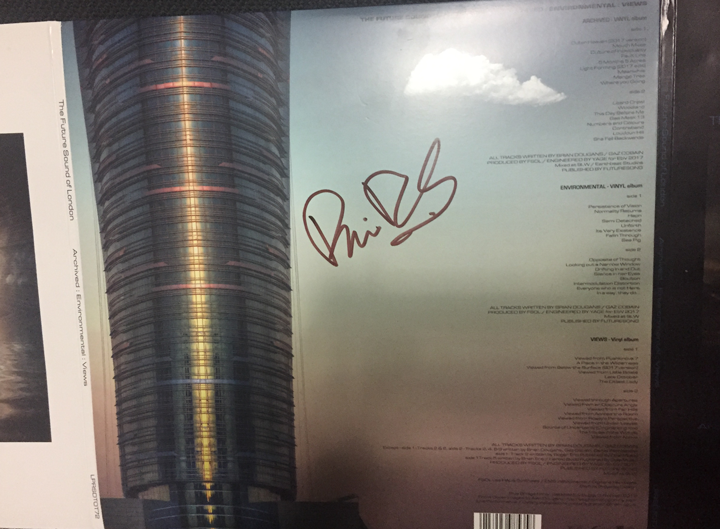 Everything is amazing but Views has a special place in my soul.........Such introspective tracks

Completely agree with you, Views is the higher point of the album -- emotionally intense listening.
Top

I must be the most useless FSOL fan around the world for the last months I think, hearing about these fabulous last FSOL releases quite recently and watching people getting signed physical copies already has convinced me I can not keep up with guys' releases and wont be able for some time as Im currently on the dole. Want to believe these are not limited edition stuff.
I had killed a man...a man who looked like me
Top

I hope things improve for you soon man.

About the CD I agree that the artwork is indeed very appropriate to the music this time, the booklet artwork for Environments 2 always bothers me, only the front cover seems appropriate. Interesting to see that only the centre page is by Buggy G. Riphead, the wonderful Blue Bridge. The rest being done by "Yage". The CD is lovely, very laid back. The whole thing seems blended very well, apart from the bonus tracks which are separate, and very much pick up the pace after the mellow piano tracks, and then slows back up with Perpendicular, which is another piano piece (I really love their piano pieces, it's so nice to have Views dedicated to them). Nice touch that the CD ends with about 20 seconds of vinyl crackle.

One question, as I don't have the full RSD album on my device today, is "Everyone who is not here" on the CD the same track as "Everyone Who Is Here" which appears in the same place on the RSD release?
I am the eye that looks within
Top

the track is titled "Everyone Who Not Is Here" on the vinyl sleeve, and same on the CD.
You're doin' too much, do less.
Top

dell1972 wrote:One question, as I don't have the full RSD album on my device today, is "Everyone who is not here" on the CD the same track as "Everyone Who Is Here" which appears in the same place on the RSD release?

Do you even have to ask?

You don't get a FSOLDigital release without at least one error in the tracklisting.
FSOL NEWS /// ENOFA
Top

I was holding out for a whole different track being used by accident!

You have to love the creative use of casing. I was having to manually enter the track names from the back of the CD last night. All I could think is that if it's making me wince, this must be killing you Ross.
I am the eye that looks within
Top
Post Reply
215 posts