What DAW/Software do you use?

What DAW/Software do you use?

by seedy
Curious to know!
Also let me know your PC specs if possible too (for a different reason - I'm thinking about building a new PC)

As yall know i'm currently getting my feet wet on Cakewalk Sonar 8.5
Beyond the stock stuff I also have a number of the free synths and effects - oatmeal, synth1, crystal, tal noisemaker, tyrellN6, all the interupter VSTs, izotope vinyl, ohm force, dfx skidder, tapestop, all the tal dubs, various spring reverbs, watkat

Formatted the computer and bought a new piece of kit

by seedy
ha! 100s of plugins
i can see how this can happen quite easily

by Ross
I use Ableton Live for effects, post-production and very occasional sequencing. Tend to use Audacity to tidy up my final masters. The next Sturmazdale album is largely made from live takes in Audiomulch. Otherwise I'm entirely hardware based these days, and looking to be completely away from the computer in the next couple of years if possible.


I don't really know what spec my laptop is, other than 'a bit shit'. It does the job though.


edit: ah, plugins. I got a disc of pirated VSTs from a friend in 2006 and used whatever was on that until last year, when I downloaded a few free ones. I've probably only ever used about 10 - 15. Generally go with in-built FX because I'm generally completely un-technical and just use whatever I've got to hand.

by tryptych
I tried to fire up some gear talk a while back, but that didn't, well, catch fire

- i5 2500K with 8GB of RAM (and pushing that to the limits all the time)
- Double displays (the other I got for free from a friend)
- Cheap-ass Samson monitors which I use for listening and tracking. Not even nearly detailed enough for professional work.
- Sennheiser HD555 (prosumer) headphones for more crucial mixing. They do the job. Nothing special.
- Reaper for DAW (switched from Ableton about a year ago) with some serious tweaks etc. Also legimate.
- Tons of LEGIMATE, purchased Nebula libraries which I use solely for mixing because of the sound quality compared to "normal" plugins.

I just recently bought a second hand semi-pro/pro RME interface for 200€ which I'm MORE than happy with. One of the best purchases I've ever made. Made a pretty big difference compared to working with some crappy internal soundchip, mostly because of the drivers and output.

Seedy, I'd say, know your gear instead of hogging tons of pirated software if you're just starting out. Grab something you REALLY like and drop some money on those guys. Just a tip

by seedy
well i'm just curious as to what the good folks here use
i've surely read the common statement to say you are better off learning how to use 1 synth properly than use 10 synths like a novice.
naturally i've no idea what i'll end up using the most in the long run. gotta test the waters here and there!


specs is just.....well my PC was set up very poorly. it runs pretty good but i'm not sure i've challenged it too much.
to date the toughest it has seen is tyrellN6. i would like to be able to run practically anything though and I'm pretty sure my PC will not be able to do that

it's going to take some time but at this point i cannot stop the train of obsession (even though i have like no money).
step 1 - somehow convince the wife to allow me to spend some money
step 2 - i know nothing about building a PC
step 3 - build the PC

this is so intimidating. i'll post it to forums and talk to a buddy of mine who knows tech stuff but ultimately it's hard to even brainstorm when i read so much about stuff i have zero clue about.
how many and what type of hard drives do you use?

i think i'm going to skip on SSD for this round.
i have a 75 gig velociraptor that i would love to use again but i'm scared it will not end up big enough for my OS/program data

by Ross
Hard drives... the one my laptop came with. Hah.

by mcbpete
Totally forgot about this - My house mates were away over Christmas so I managed to take over the living room: 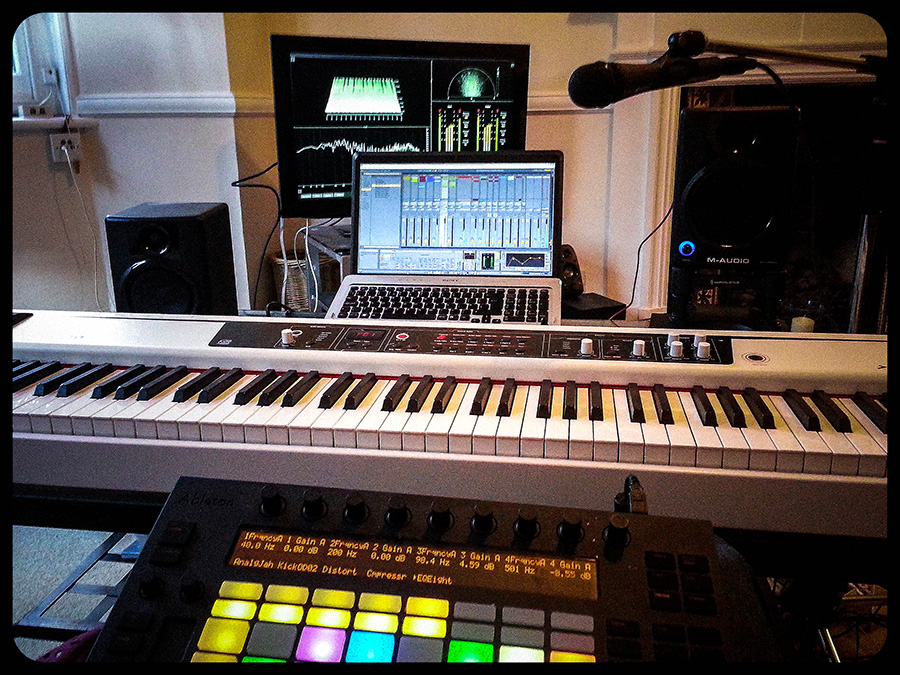 by devrandom
Well, until I get some proper analogue hardware, I'm stuck with my current music creation station. It's a Samsung laptop, running Xubuntu Linux (newest version). As far as software I use goes, I use three things mainly. Firstly, to compose I plug parameters into a hand-made generative composition program and see what comes out. When I get a melody I dig, I go to MilkyTracker, pop in a few analogue synth samples and program the melody in, taking chords into account. I export as Wave, then go to Audacity to mangle it until it sounds rad. So, in short: homemade melody generator, MilkyTracker, Audacity.

by epitome
I use FL Studio for pretty much everything on my mid-spec laptop. Seriously planning to put real time into making some music this year (I have a lot of learning to do).

I'm so determined to put the effort in, that I just bought a Waldorf Blofeld synth - seems pretty saucy.
All times are UTC+01:00
Page 1 of 1